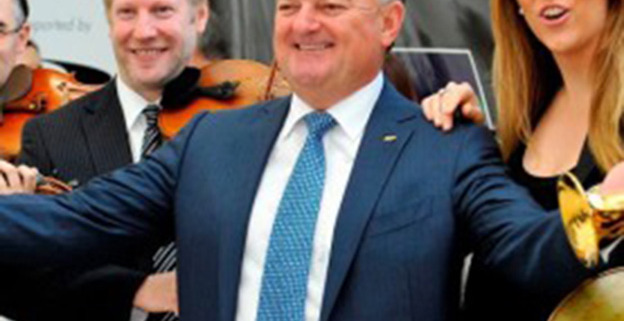 We are incredibly excited to announce Automotive Holdings Group has signed on as the Foundation Partner of Perth Symphony Orchestra, inking a three year sponsorship that underpins the administration and logistics of the ambitious musical undertaking fronted by a group of respected musicians led by director Bourby Webster and chief conductor Jessica Gethin.

AHG managing director Bronte Howson said the partnership had its genesis when PSO played at the 2012 Leeuwin concert. “I think anyone who saw their performance with Marina Prior and David Hobson had to be impressed,” said Mr Howson.

“We had some initial discussions with Bourby about the orchestra’s requirements to reach its goals and we realised that there was an opportunity for AHG to be part of something we believe will be really important in the Western Australian community.”

Mr Howson said the partnership complemented AHG’s many existing community sponsorships. “We have a strong position in community engagement through community service organisations such as Rocky Bay along with a range of sporting sponsorships. This partnership will give us a strong and very enthusiastic presence in Western Australia’s cultural scene.

The AHG partnership includes a significant contribution to PSO’s administrative costs, a range of corporate performance opportunities and transport support for visiting players and for the orchestra’s performances outside the Perth metropolitan area and is worth over six figures per year .

Ms Webster said the partnership was important to PSO.

“The Perth Symphony Orchestra has established itself in a very short space of time as an exciting and broadly appealing new entertainment experience in WA’s cultural scene,” she said. “AHG coming on board as a Foundation Partner provides important financial and in-kind support over the next three years, and will assist us in sharing the wonderful experience of a symphony concert with new, diverse audiences – something we are committed to doing.”

One of the exciting developments will be a Rand Truck emblazoned with a banner showcasing the PSO that will travel daily up and down WA’s main freeway, promoting the orchestra and the relationship.

Automotive Holdings Group Limited (ASX: AHE) is a diversified automotive retailing and logistics group with operations in every Australian mainland state and in New Zealand. AHG is Australia’s largest automotive retailer with 124 dealership franchises located across Australia and in New Zealand. Its major operations are in Western Australia, New South Wales, Queensland and Victoria and include 11 out of the top 12 manufacturers in Australia. AHG also sells many leading truck and bus brands.
AHG operates logistics businesses throughout Australia through subsidiaries Rand Transport and Harris Refrigerated Transport (transport and cold storage), AMCAP and Covs WA (motor parts and industrial supplies distribution), VSE, providing vehicle storage and engineering, Genuine Truck Bodies, which provides body building services to the truck industry, and KTM Sportmotorcycles (motorcycle importation and distribution in Australia and New Zealand).

Four years in the making, Perth Symphony Orchestra was founded in 2010 to provide Western Australia with a world-class orchestra able to work in a number of environments across genres with a particular focus on securing performances in regional areas across WA. The orchestra launched in November 2011 at the inaugural Symphony by the Bay, a stunning collection of some of the symphonic repertoire’s most loved works. Guest soloists with the orchestra included soprano Sara Macliver, Concertmaster Paul Wright and Principal Cellist Sophie Curtis. In December 2011 the Orchestra performed on the closing weekend of the ISAF Perth 2011 World Sailing Championships on Fremantle Esplanade with Lucy Durack (of the musical Wicked fame) as a guest artist. In February 2012 the Perth Symphony Orchestra débuted at the Leeuwin Concert working with Marina Prior and David Hobson: a concert that was critically acclaimed and publicly extremely well received.
The orchestra continues to go from strength to strength and is picking up fans and followers every step of the way.