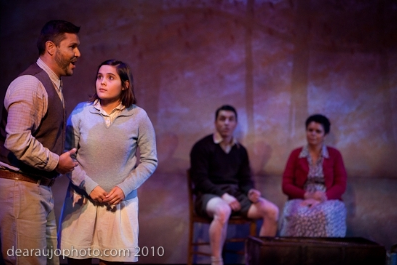 There was not a dry eye in the house for the opening night, with the poignant, sometimes funny, many times harrowing, performance taking place on stage above the orchestra’s head. Deborah praised the orchestra in her speech at the post-performance VIP function, “we could not have done this without the talent and hard work of the Perth Symphony Orchestra and their management”, Cheetham said.

Perth Symphony Director, Bourby Webster, is particularly proud of the orchestra’s performance, “there is not one bar, in one part, where someone can take a moment to relax. The score is stunning yet complex with every instrument taking almost a solo role,” she said. “The orchestra performed superbly for the Opening Night and I am looking forward to hearing the orchestra perform for the rest of the season as their empathy with the music grows with familiarity.”

Pecan Summer tells the powerful story of children who were taken, the exodus of the Yorta Yorta people from their homeland and the inevitable and unending quest for belonging.

Sixty thousand years of Yorta Yorta history.  70 years of dispossession. The summer of 1939 will change the lives of the people of Cummeragunja forever.

Alice is nine years old. Her family is her entire world. Alice’s world is about to be torn apart.

Pecan Summer is an opera for the 21st century, a contemporary opera for Indigenous Australians, a story for all Australians. With only two shows remaining, this is a stunning piece of opera that anyone and everyone will enjoy and be touched by. Tickets from BOCS Ticketing or available from the Box Office before the show.

Deborah Cheetham, Yorta Yorta woman, Soprano, composer and playwright, made her international debut in 1997. Since that time Ms Cheetham has performed in the theatres and concert halls of the USA, Europe, the United Kingdom, New Zealand and throughout Australia.

In June 2003 Ms Cheetham was presented with the Centenary Medal, in recognition of her outstanding contribution to the arts in Australia. In 2010 Ms Cheetham was a finalist for Australian of the year in Victoria.

In April 2007 Ms Cheetham was awarded a prestigious two-year fellowship by the Aboriginal and Torres Strait Islander Arts board of the Australian Council for the Arts. With the support of this fellowship Ms Cheetham created Australia’s first Indigenous opera, Pecan Summer.

The success of Pecan Summer and a strong desire to create a pathway for Indigenous singers in the world of opera, led Ms Cheetham to create Short Black Opera Company, a national not-for-profit opera organization devoted to providing education, training, guidance, and performance opportunities to Indigenous singers who wish to pursue a career in the demanding world of classical vocal music. Short Black Opera Company is devoted to uncovering and encouraging new talent within the Indigenous community.

To read more about the story of Pecan Summer, visit WA Today.

The Perth Symphony Orchestra’s Facebook Page hosted a competition to win a double pass to see Pecan Summer. The competition gathered much interest but unfortunately there could be only one winner- Annalee Stearne won the double pass and will be going on September 7th, for the opening night.