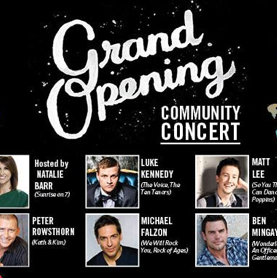 It’s finally here! The brand new Bunbury Regional Entertainment Centre (BREC) kicks off with an amazing Opening Festival. The headline community concert event is the new show “Swing on This” featuring a wealth of TV stars and a Perth Symphony Orchestra Big Band.

Bunbury’s golden girl Natalie Barr is our guest of honour and will MC this community concert in celebration of the Grand Opening of the newly expanded and refurbished BREC.

For a very low $20 per ticket, bring the whole family along to see a host of fantastic Australian performers including comedian Peter Rowsthorn and Swing On This, a full-scale cabaret feast starring Michael Falzon (We Will Rock You, Rock of Ages), Luke Kennedy (The Voice, The Ten Tenors), Matt Lee (So You Think You Can Dance, Mary Poppins) and Ben Mingay (Wonderland, An Officer and a Gentleman).

In Swing on This, these Australia’s leading stage talents deliver a modern, audacious take on some of the all-time swing classics along with ‘well-swung’ interpretations of rock and pop songs that have defined the last four decades.

Your toes will be tapping to the sophisticated sounds of the fifties through to the nineties and noughties.