In my 40 years of touring, this [Perth Symphony] was the tightest orchestra I have ever worked with!

Easter weekend saw members of Perth Symphony Orchestra travel to Margaret River (one of our favourite places in WA!) to perform on stage with Australian pop sensations – John Farnham and Olivia Newton-John.

Chong Lim – John Farnham’s long standing Musical Director, is also MD for Australia’s Dancing with the Stars and has in the past worked with artists including Olivia Newton-John and Kylie Minogue.  This talented man took a long, hard look through John and Olivia’s incredible back catalog of hits and rearranged crowd favourites for a symphony orchestra, to be debuted at Sandalford Winery, here in WA.

Chong was an absolute pleasure and inspiration to work with.  For someone who is constantly surrounded by Australia’s stars, he was humble and approachable, and shared a very similar vision of the future of music as we do, here at Perth Symphony.

“Olivia, John and I had a great time working with The Perth Symphony. The orchestra has a wonderful sound and the enthusiasm and hard work from all the players and the administrative staff made it a very enjoyable experience. Nothing was too difficult. Thank you and best of luck!!!”

The concert was so much fun – with John and Olivia showing that they’ve still go ‘IT’.  The orchestra couldn’t help but smiling and singing along to favourites such as Summer Lovin’ and Get Physical, and there was an eruption from the crowd with the opening of The Voice, and again when the iconic Pipers appeared on stage!

After the concert, the orchestra, band and artists were buzzing with excitement with the first show of the tour a success! John Farnham had only praise and thanks for Perth Symphony – saying we were the tightest orchestra he had worked with in his 40 years of touring and performing! 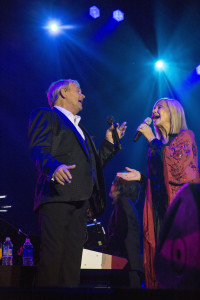 PSO’s End Of Financial Year Giving Campaign off to a great start!