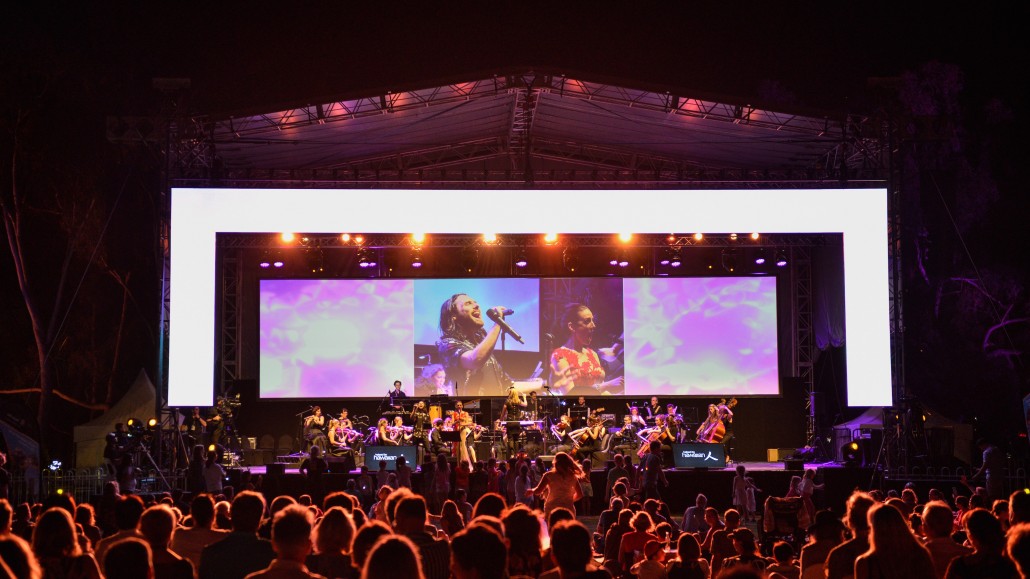 The mission of Perth Symphony Orchestra is ‘Music for Everyone’ and we love taking the orchestra on the road and into new communities, sharing the magic of the Symphony with as many people as we can.

PSO ‘DISCOVER’ concerts: where communities discover each other, and the magic of the symphony, all in one evening.

This summer, thanks to the incredible support of so many local government Town and City Councils, we are able to bring the Symphony to a community near you. Performing as a string ensemble with percussion up to the full symphony orchestra, our programs are designed to give each and every person who comes to hear us a magical time. So, whether INXS or Puccini is your thang, DISCOVER the magic of PSO and expect something for everyone.

Ensure you are on our mailing list ensure you never skip a beat with PSO. Head to the pink tab at the top of our home page to sign up!

Bring a picnic, bring your family, bring your entire street! These concerts are an excuse to bring everyone together for a stunning summer evening under the stars and remember to check back here regularly to see where else we are going.

We were very excited to be part of ECU’s annual alumni concert for the first time, piloting a very special collaboration with the Western Australian Academy of Performing Arts (WAAPA). With an Orchestra made up of PSO Principal players and current WAAPA Classical Music students, we brought you an orchestral concert with a twist, performing a range of classics and contemporary hits, which had the crowd up and dancing in no time!

2nd December, 2017: Act-Belong-Commit’s ‘Rock Symphony’ for the City of Kwinana
We are excited to make our Kwinana debut with Act-Belong-Commit’s ‘Rock Symphony’ at Callista Oval. Support Acts hit the stage from 6.30pm with the full orchestra on around 7.30pm. The program featured Justin Burford who recently wowed audiences as ‘Kurt’ in our UNPLUGGED: Nirvana Reimagined concert. Justin sang INXS, Nirvana, Queen and more. The wonderful Fremantle-based singer, Rose Parker, joined us for a rendition of Stairway to Heaven by Led Zeppelin, inspired by the performance by Heart at the 2012 Kennedy Centre Honours in the US. Several young WAAPA artists also made the PSO full symphony debut, with Lani Melrose and James MacCallum joining us on stage (both of whom featured in our recent Faith & Freedom: The Music of George Michael concert at The Astor) along with soprano Rebekah Bennett and tenor Joshua Mitting. Also featured was young Scotch College piper Ryan Hodgetts in a brilliant rock medley of ACDC and John Farnham. Scotch College is the home of PSO, so it was great for us to collaborate with a young student from the College.

Saturday 10th February, 2018: ‘Love is All Around Claremont‘ at Claremont Park
Claremont and surrounds residents joined us as we celebrated love, with a special event in the heart of Claremont. Conducted by Jessica Gethin, PSO strings and solos performed our romantic repertoire on Saturday 10 February 2018 in a concert inspired by love. However, it wasn’t all Bach and Beethoven – concertgoers enjoyed popular songs by Ed Sheeran, INXS, Robbie Williams and more at this free event.

Saturday 17th February, 2018: Romance on the Green at the Village Green, Rockingham
As part of the Summer Series, the City of Rockingham invited local residents to enjoy the Perth Symphony Orchestra Big Band and Strings, with special guests performing at Romance on the Green. This concert featured songs by Queen, Adele, INXS and Led Zeppelin.

Sunday 18th February, 2018: Music At Murdoch at Murdoch University’s Bush Court
PSO returned to Murdoch University for a third year running in 2018, to perform all your Motown favourites! We had the crowd up and dancing and having an amazing time!

South Perth Sounds (formerly the Fiesta Concert), a free community celebration will feature Perth Symphony Orchestra and the WAAPA Gospel Choir as they come together to perform Faith & Freedom: the music of George Michael. The concert follows their sell out performance earlier this year at the Astor Theatre in Mount Lawley which received rave reviews.

Pack a picnic, bring your family and friends along while you enjoy an evening of your favourite George Michael and WHAM songs with a fresh orchestral twist by Perth Symphony’s strings, drums and percussion.