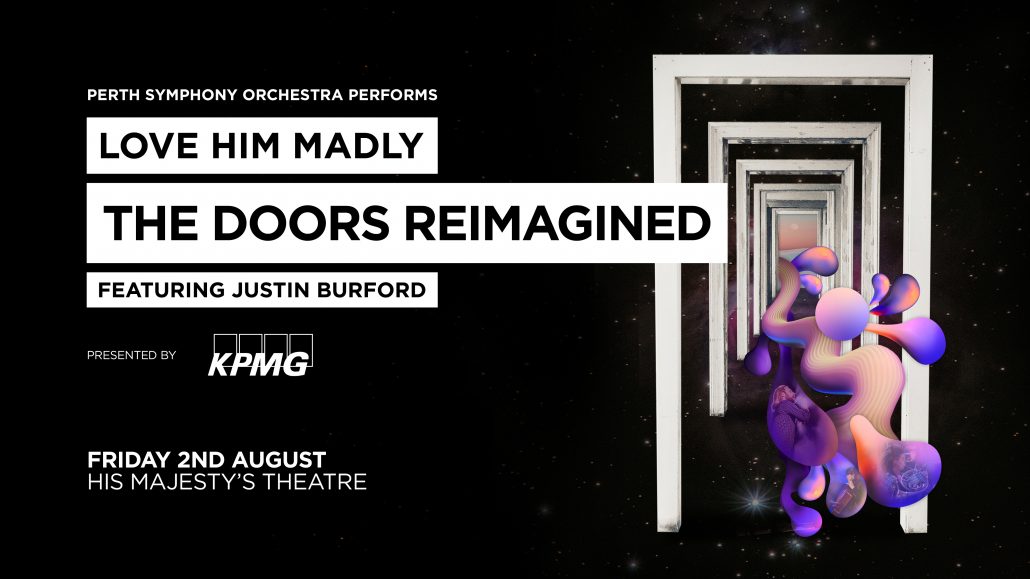 Love Him Madly: The Doors Reimagined

"Is everybody in? The ceremony is about to begin..."

In one of the most psychedelic orchestral concerts you will ever experience, Perth Symphony will celebrate one of the highest selling rock bands of all time, The Doors. Together with their frontman Jim Morrison, an American Poet, they changed music forever.

The Doors was conceived at a time when the counterculture and free love movements of the 60’s rebelled against the Vietnam War and assassinations of JFK and Martin Luther King Jr., with civil rights protests, psychedelic music and the Summer of Love. Taking their name from Aldous Huxley’s mescaline-imbibed book The Doors of Perception, from 1967 they released eight albums in five years to become as important and influential as greats of the era such as The Beatles, Jimi Hendrix, Janis Joplin and The Rolling Stones.

After the massive success of Perth Symphony’s  ‘Unplugged: Nirvana Reimagined‘, we’re returning to His Majesty’s Theatre for this spectacular night that will capture the essence of Jim Morrison and The Doors at the height of their powers, in full psychedelic glory via the trippiest orchestral show you will ever see…

“The concert exceeded all expectations. The energy of the orchestra and the drama created by the vocalist was perfect. One performance was not enough. Loved it!”
– UNPLUGGED: Nirvana Reimagined patron, 2017

“This was by far one of the most brilliant shows I have seen, I had shivers down my spine. Such talent and proud they are in my home town. Thank you”
– FAITH & FREEDOM: The Music of George Michael patron, 2017

“I took my grandson to his first ever symphony concert for his 21st… By the end of Nirvana Re-imagined he was totally hooked on orchestra. THANK YOU PSO – here is one young man who will be hooked for life”
– UNPLUGGED: Nirvana Reimagined patron, 2018