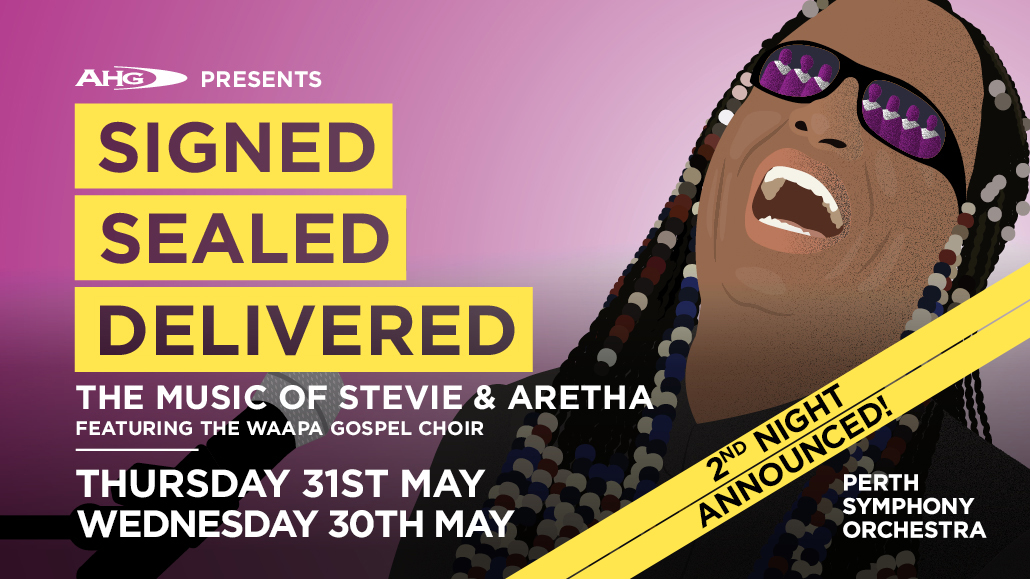 the music of Stevie Wonder and Aretha Franklin

Due to popular demand: 2nd show just announced!
Tickets on sale now for Wednesday 30* May and Thursday 31 May.

In the world of popular music, it doesn’t get any bigger than Queen of Soul Aretha Franklin and child prodigy-turned-superstar “Little” Stevie Wonder.

Now, due to overwhelming popular demand, Perth Symphony Orchestra (PSO) and WAAPA Gospel Choir have announced a second show at the Astor Theatre on Wednesday, May 30, in addition to the previously announced first show on Thursday, May 31. Tickets to both shows on sale now.

With Aretha Franklin set to retire and release her final album in 2018, produced by Stevie Wonder no less, PSO, who have reinvented everything from Nirvana to Ministry of Sound in the past 12 months, are readying themselves to break the rules once again.

Teaming up with the WAAPA Gospel Choir for a second time following the sold out George Michael tribute Faith & Freedom in 2017, they reunite at the Astor Theatre to perform the work of not one but both of these legends of soul, pop, funk and R&B.

The show is not just hits but songs that tell their amazing life story and their legacy. And as we’ve come to expect from PSO productions, this will be about more than the music, with an historic guide through these artists’ life changing cultural and political milestones.

THE TALENT – HIGHLIGHTS
As Head of Contemporary Voice at WAAPA and Director of the WAAPA Gospel Choir, Matt Allen is set to own Stevie Wonder. A successful soul/R&B singer in his own right, he has the chops, simple. Sophie Foster, your Aretha for the night, will leave you in awe singing the aria Nessun Dorma made famous by Pavarotti – when he pulled out of a performance for a major event celebrating family, Aretha stepped in at two days notice. Aretha not only nailed it, but made it her own. Family was so important to her as she had her first child at 12 and second at 14.

At just 13, Jordan Rabbone is a student of Matt Allen, a year 8 student at Woodvale Secondary College, and a precocious talent to match “Little” Stevie. He will illustrate just how young Wonder was when he was breaking America. Plus, Stevie’s first album aged 11 was a Ray Charles cover record on which he played harmonica all the way through. It was his first instrument, and Chelsea J Gibson, fresh from TV’s The Voice where she was picked up by Boy George to play with Culture Club, will guest on harmonica.

Plus let’s not forget there’s a Choir. And an Orchestra. With horns.

ABOUT THE SHOW
Get ready to be dancing in the aisles – gospel style – and expect arrangements unlike any soul orchestration you know. Perth Symphony strings, rhythm section and horns will replace the traditional ‘band’ using strings as a foundation, giving orchestral musicians their chance to put the soul into the sound, with original charts written by Adrian Kelly, Johannes Luebbers and Jared Yapp, and conducted by PSO’s own Jessica Gethin.

Further, it is set to show the full range and might of the WAAPA Gospel Choir as they cover popular music’s most iconic male and female voices – freakish talents taken on by WA’s own freakishly talented singers.

During his 1970s classic period, Wonder wasn’t just writing hit after hit like Superstition, Sir Duke, Isn’t She Lovely and Signed, Sealed, Delivered I’m Yours. He was publicly outing Richard Nixon with political fervour; and suffered a life-changing car accident that saw him in a coma for four days in 1973. His more than 30 top 10 hits and 25 Grammy Awards include back-to-back Album of the Year gongs in 1974-75, when he was just 25-years of age.

Franklin’s staggering run of 20 number ones on the Billboard R&B Chart and pop hits such as Respect, Natural Woman, I Say a Little Prayer and Think are all the more powerful in light of the fact she had given birth to two children by the age of 14, and is a survivor of domestic violence. She made waves performing at Barrack Obama’s Presidential inauguration, and she’s the first ever female performer to be inducted into the Rock and Roll Hall of Fame in 1987. She is rated by Rolling Stone as the number one greatest singer of all time.

Share in a dream pairing of local talent when Perth Symphony Orchestra and the WAAPA Gospel Choir celebrate the dream pairing of Stevie Wonder and Aretha Franklin. As Franklin said recently about the release of her forthcoming album: “We’re not pigeonholed to any one thing. Of course, several of the songs are going to be produced by Stevie (Wonder)… There’s only one Stevie, right?”

Where: The Astor Theatre
Tickets: From $75+bf. Book here.

*Balcony seats only available for Wednesday 30 May as the Stalls are reserved for a private function.