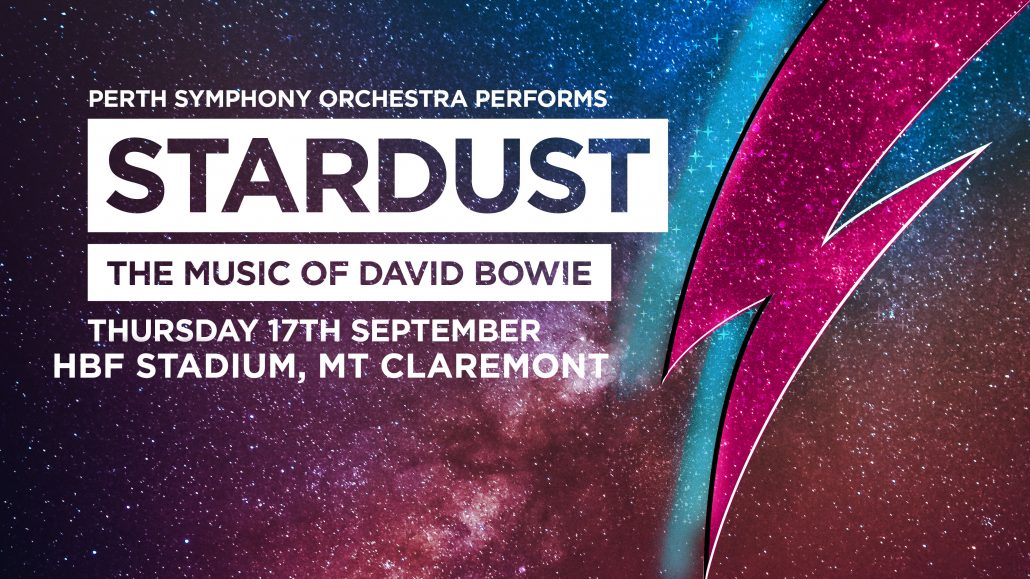 Stardust: The Music of David Bowie

NEW TICKETS RELEASED NOW.
Click below and get them while you can!

Due to overwhelming popular demand, and in keeping with COVID-19 regulation on large social gatherings, PSO’s previously sold out Stardust: The Music of David Bowie has moved from the Astor Theatre to HBF Stadium, Mount Claremont on September 17.

Find Fashion, find Fame, be a Rebel (Rebel), and we’ll all be Heroes… just for one day.

STARDUST: The Music of David Bowie offers the sort of innovation the Thin White Duke himself would be proud of. Having already garnered acclaim and standing ovations from delighted audiences in its rare appearances, it won’t surprise anyone to hear just how amazing Bowie’s songs sound with a majestic, ethereal orchestra behind them.

After all, Bowie always aimed for widescreen and celestial, and this production delivers just that. Sound, and Vision.

Just think of the unforgettable songs fans will choose between, including Heroes, Changes, Ziggy Stardust, Space Oddity, Rebel Rebel, Young Americans, The Jean Genie, Suffragette City, Life on Mars? and Ashes to Ashes, all the way to Queen collaboration Under Pressure.

Joining PSO in the role of Bowie are the multi-dimensional talents and androgynous pairing of singers Addison Axe and Steve Hensby, who will represent the moves, moods and many sides of Bowie’s sexual charisma. Axe is originally a Londoner and veteran of wildly acclaimed WA bands Axe Girl and The Tommyhawks, while Hensby is a live entertainer par excellence, whether alongside his 8-piece Steve Hensby Band, or performing on Fringe World stages showcasing his theatrical side.

STARDUST: the Music of David Bowie is made possible thanks to support from the Barton Family Foundation.
We would also like to acknowledge ongoing support from Sustainability Partners Minderoo Foundation and Tim Roberts Giving, Foundation Partner AHG and The State of Western Australia.

In case you missed it…

It’s time to put on your red shoes and dance as we present the music of David Bowie. And you can choose the songs too!

In honour of the 30th anniversary of Bowie’s 1990 Sound+Vision tour, in which audiences around the world voted for songs by calling a hotline, Perth Symphony is opening up song selection to the public. Innovative, as wildly acclaimed as he was popular, and quite simply one of the most influential artists of the 20th century, witness the moods, colour and androgyny that continues to impact popular culture even now.

Voting takes place between Feb 14 – Mar 28, and just as the proceeds from Bowie’s Sound+Vision requests went to charity, fans will be able to donate at the time of ticket purchase and voting, with part proceeds going to the Royal Flying Doctors Service WA.

Sorry! The vote is now closed and the fan favourite tracks have been selected! You can take a listen to the top 10 tracks (as selected by the public) on Spotify here, or better yet, book your tickets today to hear these songs live in concert!