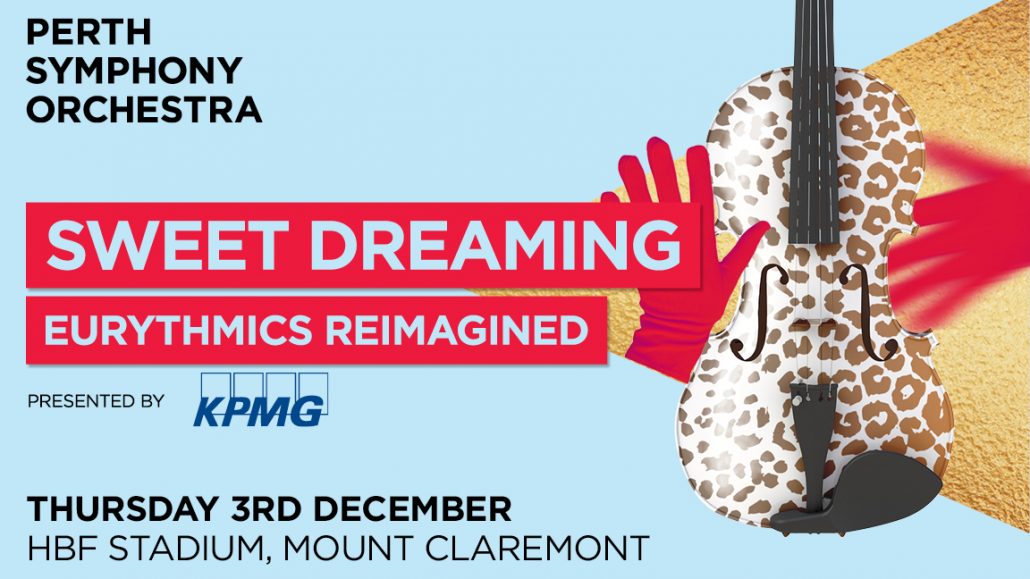 We’ve revisited the 60s with The Doors, brought an epic stadium experience to the 70s via Bowie at HBF Stadium last month, and the 90s with Nirvana. Now it’s time to don the red gloves and ask “Who’s that girl?” as Perth Symphony Orchestra take you to the 80s for an orchestral party like nothing before!

In 2020, the Reimagined series is giving WA audiences the rare and unprecedented opportunity to hear the music of one of rock’s most enduring symbols, the amazing Annie Lennox, live. Complete with innovative orchestral arrangements breathing new life into the songs, this is the band who were unlike anything before them, in a way you’ve never heard them before. And with three breath-taking singers set to embody the eras and unique harmonies of Lennox, it promises to be a feast for the senses unlike anything else in Perth this year.

Perth Symphony would like the thank KPMG for their contribution to this concert, along with Barton Family Foundation and Kim Grist, and acknowledge ongoing support from Foundation Partner AHG, Sustainability Partners Minderoo Foundation and Tim Roberts Giving, and funding from The State of Western Australia.

It’s high time to announce the three voices each representing different eras in the unparalleled career of Annie Lennox. PLUS, Perth Symphony welcomes a new face to the conductor’s baton care of our Women on the Podium program, and PSO’s own INNEKA, the act that took Telethon by storm, play a special featured set.

Eurythmics Reimagined takes on a unique chronological format. Playing the spunky new wave synth-pop Lennox of the early 80s will be Irish non-binary vocalist Freddie Mai. Making waves in 2019 with the jazz/soul outfit Bass Lemon, Mai grew up in Fremantle. Renowned for their soulful vocals and powerful presence, Freddie has become a mainstay in the Perth scene. Since the dissolution of Bass Lemon, Freddie focuses purely on writing new music and producing their own solo project. But we can’t wait to see them with a red crew cut singing Here Comes the Rain Again and Sweet Dreams (Are Made of This).

Sabrina Davies brings with her one of Perth’s biggest voices as well as history of singing Annie Lennox. While she’s best known for her wildly successful ‘P!nked’ and Lady Gaga shows, she grew up a child of the 80s on influences like Kate Bush, Eurythmics and divas Aretha Franklin and Whitney Houston. When tomorrow finally comes, we can’t imagine a better singer to own that iconic blonde crop and bring the Miracle of Love, Thorn in My Side, Would I Lie to You and so many of the biggest hits of the mid-80s to life.

Last but far from least, Ali Bodycoat is well regarded as one of Western Australia’s most respected vocalists. She has established herself as an unrivalled force in the local music and artistic industry – a constant on the West Australian jazz fest scene, Ali returns regularly to the Perth International Jazz Festival, Jazz by the Bay and has performed in over six Fringe festivals, winning Best WA Cabaret for her original show, Minor Major Marlene in 2017, amongst many other Fringe awards. Ali has performed for the Melbourne Symphony Orchestra Gala at the iconic Melbourne Town Hall in October 2018 and was guest vocalist at the Perth Festival 2020 launch. With all the poise of the Annie Lennox solo era post-Dave Stewart in the early 90s and beyond, plus ‘Diva’ headgear and attitude to match, we can’t wait to see her bring to life solo era hits from Walking on Broken Glass and Little Bird to Why? to the stage.

The big announcements don’t stop there. Jen Winley makes a first-time appearance as PSO conductor, bringing a world of experience to the baton. Winley completed a Bachelor of Music Performance in Percussion at WAAPA, graduating top of her class in 1999. Moving to Melbourne in 2000, she worked frequently with the Melbourne Symphony, including tours to China and Russia, and regularly with Orchestra Victoria. In high demand as a freelance musician, Jen has worked with WASO, the Adelaide Symphony and Tasmanian Symphony orchestras and the Academy of Melbourne in addition to regular chamber music performances. During this time, Jen has worked with world class artists such as Pinchas Zukerman, Luciano Pavarotti, Debbie Reynolds, John Farnham and KISS. Jen is currently completing a Master of Music in Orchestral Conducting at UWA and works as a conductor for the WA Youth Orchestra (WAYO).

Finally, adding a bit of spectacle and ‘wow factor’ to the start of the night will be the electric violin quartet everyone’s talking about right now, INNEKA. With a special featured performance from 7:30pm, think Ministry of Sound meets Hans Zimmer – in New York. Four women, four stunning electronic instruments, each on four strings. Having already featured at Telethon, the State Theatre Centre and on the cover of The West’s Play Magazine in the past three months, INNEKA combine the virtuosity, energy and emotion of classical with electronic music and instruments.

Sweet Dreams are indeed made of this. In the perfect follow up to a wildly successful Stardust: The Music of David Bowie last month, it’s impossible to separate Eurythmics from the gender-bending imagery of Lennox. When Sweet Dreams (Are Made of This) made them the stars of MTV in 1983, she was an instant success. The red crew cut, like the short blonde do that followed, are 80s iconography.

She was the sister doing it for herself, and together with producer/guitarist Dave Stewart she released some of the decade’s most unforgettable songs: Who’s That Girl, Miracle of Love, Here Comes the Rain Again, Thorn in My Side, There Must Be an Angel (Playing With My Heart), Missionary Man, Would I Lie to You, It’s Alright (Baby’s Coming Back), Right By Your Side, When Tomorrow Comes… the list goes on.

The fact that Eurythmics were able to do it all in such a short period of time – eight albums in eight years – is so prolific it’s almost Beatles-esque.

Add Lennox solo hits such as Walking on Broken Glass and Why and you have one of the great catalogues in popular music. And yes, this concert will feature favourites ranging from Eurythmics’ early 80s synth-pop visionary phase to Lennox solo classics including her Lord of the Rings contribution Into the West, and everything in between.

EURYTHMICS + AUSTRALIA
1983 was a big year for Eurythmics. On January 4 they released second album Sweet Dreams (Are Made of This). Later that month the single of the same name – their fourth from the record – catapulted them to worldwide adoration.

It was a major change in fortunes for the duo who just a couple of years earlier were playing in little known new wave band The Tourists, before coming up with the idea to form Eurythmics in a hotel in Wagga Wagga, central NSW in 1981. The Australian connection is appropriate given their endlessly loyal fanbase here.