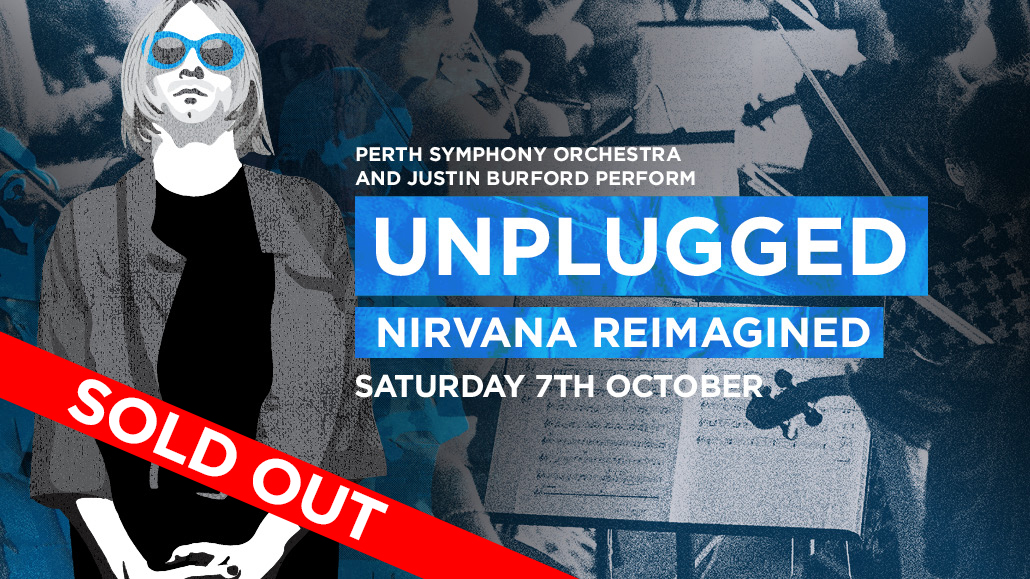 the music of Nirvana, reimagined for symphony orchestra

7pm: Foyer doors open, DJ James A provides tunes to get you in the mood in the Dress Circle foyer (1st level). Join us for a pre-show drink.
8pm: Auditorium doors open
8.30pm: Concert (no interval)
10pm: Concert end (time is approximate)

Kurt Cobain: spokesman for a generation. Nirvana: flagship band of Generation X. No one flinches when you say it.

In the year Kurt would have turned 50, Perth Symphony Orchestra presents a concert event unlike anything seen before in WA. Or anywhere, for that matter.

This isn’t Nirvana with strings. Prepare to witness a fully-fledged orchestra in bloom, transformed for one night into a raging rock beast.

Already regarded as “the orchestra that breaks rules” for their radical reinterpretations of everything from Beethoven to WA’s greatest ever songs at RTRFM and the WA Museum’s flagship event A Moment in Time, Unplugged: Nirvana Reimagined will take orchestral sounds to some heavy, heavy places.

Using Nirvana’s legendary MTV Unplugged in New York as inspiration, which took place just five-months before Kurt’s untimely death in 1994, PSO will take songs from the concert and from throughout Nirvana’s discography and blow them up.

Imagine About a Girl and Where Did You Sleep Last Night backed by a wall of sound big enough to match the angst in the songs. Picture Smells Like Teen Spirit and Lithium pushing the year punk, alternative and grunge broke through, 1991, into the stratosphere.

Unplugged: Nirvana Reimagined will not only take you back there, it will remind you of music, culture and a generation changing forever.

Joining PSO is award-winning songwriter and the veteran of sold out Nirvana reinterpretations from Melbourne to Perth, Justin Burford. Fresh from a return tour with End of Fashion, one of the greatest voices WA has ever produced will lead the concert alongside conductor Jessica Gethin, and no one nails Kurt quite like him.

Burford and PSO have bandied together to reveal their most ambitious show ever. This is a dream event for the artists and Nirvana fans alike.